The following posts are part of the Autumn/Winter 2018-19 Issue. Articles in this issue contain information about harmful media and statistics, how to teach your child to stand for godliness, how to run a business the godly way, and find out what it means to be “unchristian” in the body of Christ. Have you ever wondered what Jesus meant by “a memorial would be spoken of her”? Read about that and many more topics in this issue. Plus, read the beautiful testimony of a Jewish girl who found the Messiah.

The Greatest Jew of All Time – By Rachel Graff

The memories of rejection and inability to fit in during my younger years remain vivid, even today.  It started in kindergarten when I felt too ugly and fat to be friends with a conventionally attractive and popular classmate. I recall being the last one standing to be chosen for a team in gym class, deemed too awkward and lazy to be of any worth to my peers. One of the most painful moments was being told that I’d never have the capacity to love or be loved by the opposite sex. My social awkwardness, long Jewish nose, large ‘dumbo’ ears and passion for academics created the perfect storm. I was prime bait for junior high bullies. I was one of the only girls who wasn’t in a relationship, which looking back now was a great thing. It was a whole different story back then, cause aesthetics are everything to 12-year-olds. These earlier experiences established a deep sense of self-criticism within me.  By seventh grade, I had determined that the only way out of this cycle was to become more like the popular kids I looked up to. The same gal I had ostracized myself from during kindergarten recess reappeared, and it was seeing her with her arm around a fine looking boy that drove these ideas.  If only I looked like her, my world would fall into place.

Thus started a period of extreme calorie counting and weight loss.  My parents realized something was wrong when my daily diet consisted of a lean cuisine frozen meal and a Fuji apple. The weight fell off but my new physique didn’t erase the pain I felt inside. They thought it was a phase, and that they could fix me if they tried. The next three years consisted of pseudoscience and forceful treatment methods that only worsened my emotional condition. Some of these treatments included seclusion and sensory deprivation, which ripped away any last bit of self-esteem that I had.  What followed next was a boarding school for troubled teens.

My parents were desperate to help me, but they had no idea what was going on in the so-called haven in southern Utah.  My housemates made middle school seem like a walk in the park with their constant derision of me, which even included recommendations that I kill myself. I was told that my demise would be a relief to the entire house, cause they’d finally have me out. I received harsh threats such as these after forgetting to feed our horses. They hadn’t known that I’d previously swallowed fifty capsules of medication in a desperate attempt to end my suffering. I had overdosed the year prior after deciding I’d be better off dead than spending another day trapped in my mind.

Following the attempt at fifteen years old, I was in a medically induced coma for about two weeks, and, when I first came out of it, I still wished I had died. I finally returned home, when, about a week later, I had an epiphany. I began to appreciate nature and things I had never really paid attention to. I thought to myself that it was ironic that my body was completely fine after the overdose, considering I could have been paralyzed, brain-dead, or have some type of neurological damage. I remembered crying out to God when the anxiety attacks returned, and I began to earnestly search for Him with an open mind. I was still extremely lost during my time at boarding school and my living conditions didn’t help. I was cut from communication with the outside world and threatened to be sent ‘somewhere worse’ for violating rules. I began a hunger strike in order to instigate a trip to a local hospital that was government certified. I figured that I would either pass away or become too much of a financial liability to remain in the program and made peace with either outcome. I lived off of two pieces of fruit and eight ounces of water per day for two months before being taken to a hospital.

My story doesn’t end here, because boarding an airplane home at 90 lbs isn’t the safest idea. I was taken back to a psychiatric hospital and then to an eating disorder help center to gain back the weight I had lost. All of these programs were very secular and I began to lose the zeal and awe I had after the miracle of being delivered from a suicide attempt.

Against my therapists’ “professional” advice to have me institutionalized, my mother fought my father to bring me home and give adolescence another shot. I remember weeping so bitterly as I walked into my teal-hued bedroom for the first time in nine months. My trauma started to fade just a bit, and I remembered all of the good times with my local friends. I thanked God for delivering me from my awful situation time and time again, even though I didn’t deserve it.

I grew up as a Jew. The God I knew as a child was one of rules and tyranny. He was a lofty, existential being sitting in the sky. He didn’t care about me as an individual because he didn’t know what it was like to suffer. I was too dirty for Him. My family would regard him during high holidays, but never at home. This was God, or so I thought.

Now, with a newfound sense of purpose I began looking for God in a different way. I opened my ears to different perspectives instead of blindly listening to my friends and family. I wanted to come to my own conclusion. I ended up seeing a film about Jesus in 2016, and I immediately fell in love with him. In all of my afflictions, He, too was afflicted.  He understood my pain and met me right where I was.  It was at this time that I began to read the New Testament and build a relationship with the Jewish carpenter from Galilee. All of the sudden, the God I grew up with came alive in a powerful way, and spoke into my personal life rather than only the Kings, Judges, and Prophets of the Torah. I accepted Messiah Yeshua as my Savior shortly after.

I kept my faith from my parents for about six months, but felt that I needed to introduce them to the life that I was living anew. I’d spent many nights searching #Christian on Omegle and having virtual fellowship with strangers. I developed a desire for personal fellowship, as well as an actual Bible that wouldn’t strain my eyes as much as BibleGateway. Sharing my faith with my parents was difficult but no doubt a great decision. The Lord has given me strength to take negative comments and judgement from the Jewish community, while showing them kindness in return. My parents were very confused at first, but amazed at my changed attitude and perspective on life. 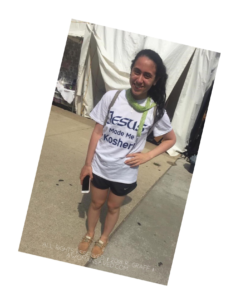 One of the wonderful outcomes of my faith journey is that my mom has also been saved by Messiah’s grace. Seeing his light shine through in my family brings me so much joy. I recently found out that my great-aunt has also believed in Yeshua for the past twenty-five years after receiving a vision while sick with cancer. Once again, no one in my family knew about this until last week. She told my mother on the phone that she had prayed for me daily in the name of Jesus while I was going through the emotional torment. She had also hidden her faith from the family out of fear of judgement, but has decided to be bold after the many prayers for me were answered. I also discovered that my great-grandmother who had survived the holocaust had accepted the Lord before she passed away a few years ago. One of my uncles had shared in the faith as well. This was absolutely shocking and I was in tears for hours after hearing how God’s grace has been weaving through my family. I always had wondered what happened to my relatives who’ve passed on, and this news has brought me great comfort. It’s reassured me that God goes above and beyond, doing more of the miraculous than we could ever imagine.

My road to find the one true God has been long and full of hardships, but I am thankful to experience what I did in order to arrive where I am.  I no longer praise God through obligation, but I praise Him because He is worthy and deserving of my praise. I still have set-backs, but remain faithful. I no longer fear and analyze every wrong that I do since I know Grace doesn’t depend on me, but on God. Religion say do, Jesus says done. 2 This is a popular statement among Christians, which is an inaccurate teaching. Anyone can earn grace after salvation. Christianity is a religion. Also, we must be God-fearing, diligent, and disciplined about what we do. This is what this magazine represents. Praise the Lord! I will no longer stress about who I am, but rejoice in who’s I am.

~ “For a brief moment I abandoned you,

but with deep compassion I will bring you back.

In a surge of anger

I hid my face from you for a moment,

but with everlasting kindness

I will have compassion on you,”