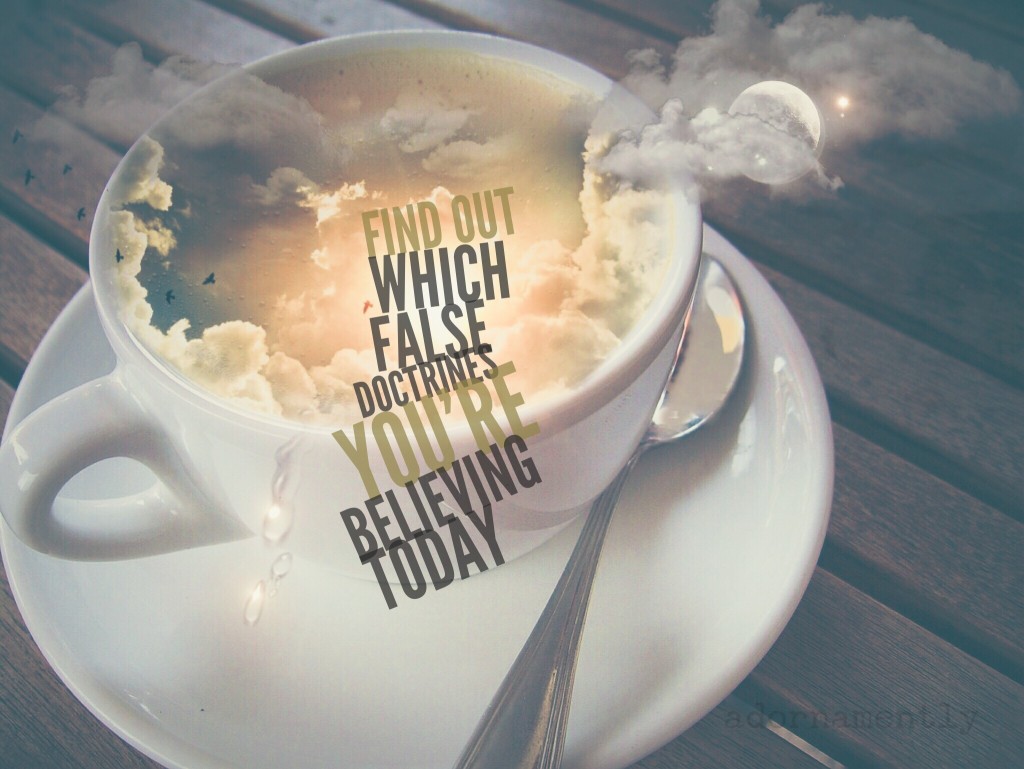 Before you begin, I highly recommend that you get the download found here:  The GIGANTIC Point You Must Know About Your Faith (This will open a new tab.)

OSAS-Once Saved, Always Saved
(a.k.a. We Could Never Lose Our Salvation)

This doctrine is horrendous because it runs hand-in-hand with the GWAAS doctrine (below).  It can remove the fear of God, prevent people from perfecting themselves, and it supports ALL the false doctrines. Therefore, many are not running the “serious” race to be ready for His coming and you may find that these people often recite “We’ll never be perfect” as a mantra. Believing in this doctrine can cause prevalent sins from blatant unbelief to murderous intent by self-reliance because they have no plans to lay their life down, but would rather fight, rather than putting their hope and trust in the One who could protect and save.

Is your faith in your guns?Misguided Patriotism: Pro-Gun Christians
“I’m so flawed, I’m a hopeless sinner, I could never be perfect.”Moment of Truth: Casting Down Lies #2
God threw away the law? Or did He complete the law? Know the difference.Throwing Away the Gift of Salvation... accidentally
SNEAK PEEK officially launching in the August 2016 Issue.Share These 15 Perfection Scriptures With Imperfect Christians
Predestination With No Choice:
This is the belief that salvation is a “luck of the draw.” People who believe this false doctrine teach that God randomly chose the good and the evil so no one really has a choice in their salvation.  It supports OSAS (above) because if we have no choice, what need is there to try harder because “we’ll never be perfect” anyway right? — as some say.  However, if there are some who believe they are on auto-perfect, it is because of the GWWAS doctrine.  This false doctrine also causes many people to see themselves as the “chosen ones” even if they have only been “called” because they decide that they themselves couldn’t possibly be a vessel of dishonor.  It also causes the world to think our God is a tyrant because the people who believe this teach that we have no choice in our salvation. But, most of all, it is a false doctrine that says that man is not ultimately responsible for his salvation because “God is the “Guy” that has favoritism on men,” so to speak.  This false doctrine removes hope; what would be the point of praying? Or spreading the gospel convincingly? It reduces these to mere fruitless exercises.
Is salvation merely a “luck of the draw”?Predestination without a Choice?
Legalistic Hypocrite:
a.k.a Legalistic Pharisee

This sneaky false doctrine, which is also the strongest, causes a fear of the law and supports the “GWWAS” doctrine (below), thereby removing people from the fear of God because they cannot move onto perfection because the fear of being “under the law” blinds them from adhering to the rest of the New Testament, especially for godly women who are required to:
show sobriety;
show modesty;
be a keeper AT home;
not teaching men nor usurping authority over the men in church;
not speaking in church;
and considering head covering.
O yes, the “law” and being “under law” have been severely twisted in this doctrine, which ultimately redefines women’s roles through modernization because they are also adhering to the GWWAS (below).  This false doctrine teaches a fear of being “religious” because of how the belief has twisted the understanding of the law.  It is amazing how –through this doctrine– one “under the Old law” act by the Apostle Peter spoken of in Galatians 2, plus a misunderstanding of the hypocrites problem, constitutes a complete withdrawal from the strict and holy doctrine that the Apostle Paul (known as a “Master Builder” in Christ) teaches and commands us to adhere to and guard.

Legalism has taught Christians that ‘strictly adhering to law’ is a bad thing. Pharisees were hypocrites, not legalists. Get the facts.Throwing Away the Gift of Salvation... accidentally
Don’t be afraid of the subject of submission. Get the facts and lies.How to Be a Godly, Submissive Wife
Why should I pay any attention to what the apostle Paul and Timothy are saying about this? Spring/Summer 2016 IssueShould Women Speak, Teach, or Preach in the Church?
Get the biblical exposition about headcovering. Spring/Summer 2014 IssueDebunking 7 Christian Headcovering Myths in Christianity
Read about the four, main examples of self-righteousness in the Bible. Spring/Summer 2016 Issue Let's Be Clear: What is Self-righteousness?
I’m sure you’ve heard that Christianity is NOT a religion… but that’s wrong.Moment of Truth: Casting Down Lies #4
Wait until you read this NEW Devotional Series coming in the August 2016 Issue.Wrong Versus Right
GWWAS:
a.k.a. Grace, Without Works AFTER Salvation…The Elmer Fudd of Grace:
This is the most bloated false doctrine.  This belief radically supports OSAS and removes the fear of the Lord so far that most Christians actually abound in looking like the world now. This false doctrine has convinced people to think that there is NO sin that could ever separate them from the love of God because His grace covers us so that we can sin because “we’ll never be perfect,” but then they say that they are perfect automatically because Jesus covers them. (Interestingly, this is part true, but not true at the same time. This is why you have to get the breakdown of why this is a web of deceit and you must be careful how you are interpreting it.) Because of this false teaching, people have also been led to believe that working out their salvation is not really necessary because the false doctrine teaches the “work” has already been done, which they are confusing with what the Bible actually says.  Also, this belief has blinded both men and women to decide in their hearts that the outside appearance of our lives no longer matters; they believe the Bible is out-of-date regarding the New Testament scriptures on worldliness, modest apparel, hair adorning, order in church, order at home, etc., except of course when certain parts suit their readiness. Unfortunately, because of this false teaching, many people have extended the generous grace of God into the acceptance of a lazy Christianity where they are soft on sin with many, big sins committed by themselves or their brethren. However, the driving force is usually about being cool, exciting, and accepting —and calling it love and gospel, but it tends to manifest itself as a demonstration of embracing everything worldly.  Unfortunately, this false doctrine teaches people to love a soft, feel-good message without the fear of the Lord.  Also, they may tend to post their own statements as doctrine rather than the scriptures and they confuse the antithesis of righteous actions (e.g. Godly rebuke, warning, separation, or even contending–in their perspective–is perceived as being unloving or judging.).  Because of this antithesis problem, you cannot expect any support from them, but they will pretend it’s there.
God threw away the law? Or did He complete the law? Know the difference.Throwing Away the Gift of Salvation... accidentally
“I’m so flawed, I’m a hopeless sinner, I could never be perfect.”Moment of Truth: Casting Down Lies #2
Read why the biblical facts about grace should not be boiled down to a simple phrase.Grace is not an excuse to be imperfect.
SNEAK PEEK officially launching in the August 2016 Issue.Share These 15 Perfection Scriptures With Imperfect Christians 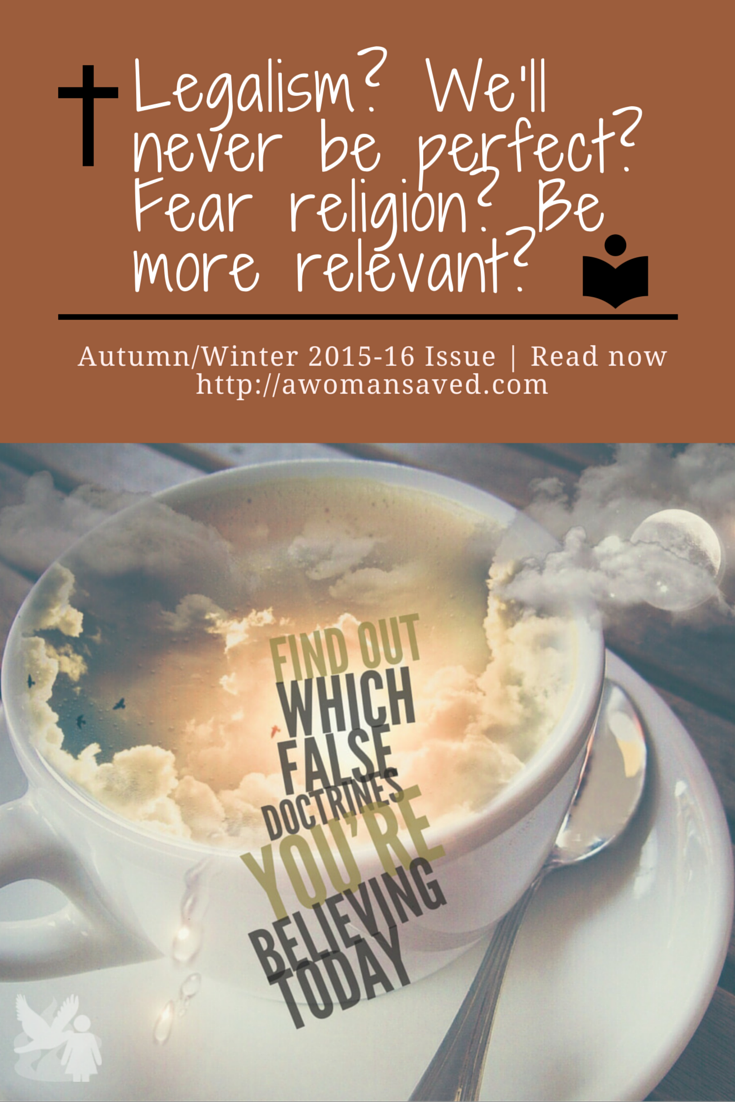 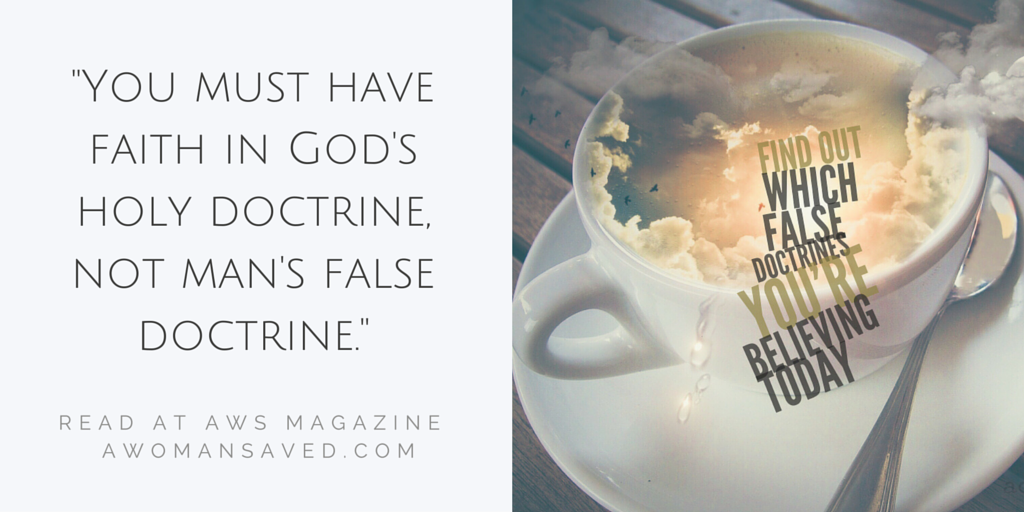