Pro-white, Racial Domination; Lynchings of Blacks and other minorities;  Oppressors of the Black Holocaust

The height of the KKK was in 1920 where it was estimated that they had eight million members.  It is easy to see how a group like this could have power over the social, educational, medical, political, financial, justice systems, and most importantly – abusing the Christian religion for decades to keep freed blacks from succeeding.  They were terrible oppressors and murdered freely.  Plus, the generational ideals of fear or segregation has passed down through families and has caused silence and support for the oppressor of today– even for those who may not mean it.  This is a direct reflection of why you see African Americans uniting for justice when innocent blacks are viewed as criminals or deserving of murder.  However, often certain whites tend to view these groups as violent because they think that oppression and racism has ended and therefore, assume that black people are complaining or “throwing the race card.”  These views known as “white privilege” trickle down from the generational racism by the slave master, KKK, or Confederate from the Black Holocaust. 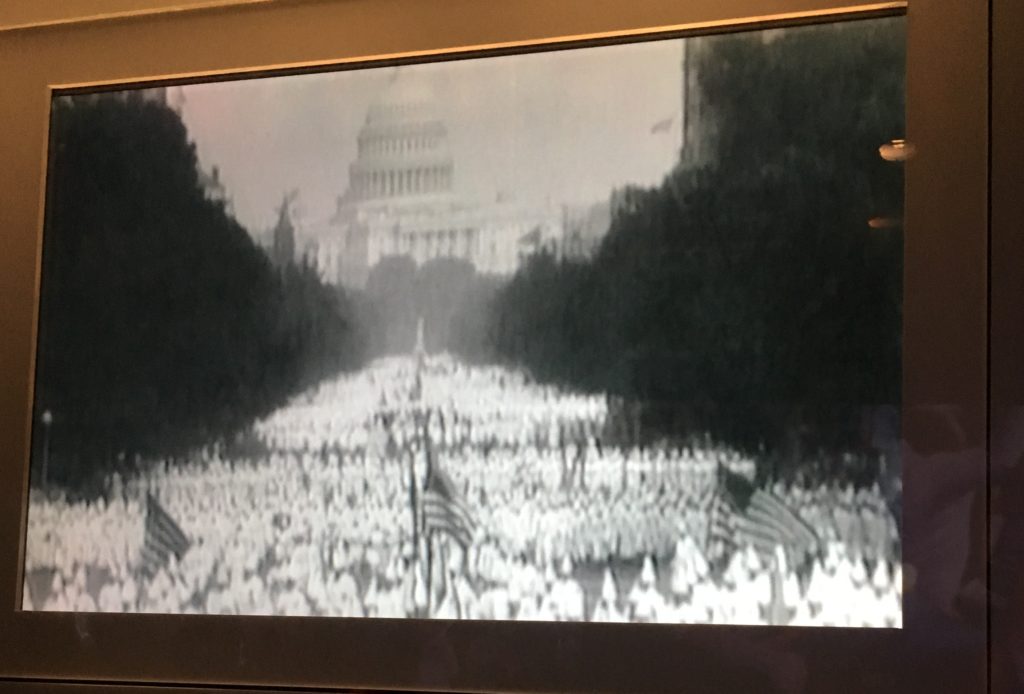 Photo taken inside of the African American History and Cultural Museum in D.C.

They use a wooden cross symbol.

Their motto is “For God, For country, For race.”  They just leave out the race part to convince right-wing evangelicals.

The KKK cites that the Bible teaches that whites are superior over the other “mud races.” They conduct a ceremonial cross burning to “shine a light” so to speak.

Don’t be fooled by their ignorance. Any separation within humanity that God commanded was due to sin, not race. They might try to take scriptural passages out of context like this:

[1] But king Solomon loved many strange women, together with the daughter of Pharaoh, women of the Moabites, Ammonites, Edomites, Zidonians, and Hittites; [2] Of the nations concerning which the Lord said unto the children of Israel, “Ye shall not go in to them, neither shall they come in unto you: for surely they will turn away your heart after their gods:” Solomon clave unto these in love. ~1 Kings 11:1-2 KJV

Of course, we ultimately see in this scripture that their strangeness was about their lifestyle of serving other gods, which turned Solomon from the living God. This made them different, or strange. It wasn’t about their color.

[7] Her Nazarites were purer than snow, they were whiter than milk, they were more ruddy in body than rubies, their polishing was of sapphire:

[8] Their visage is blacker than a coal; they are not known in the streets: their skin cleaveth to their bones; it is withered, it is become like a stick. ~Lamentations 4:7-8 KJV

These two scriptures are misinterpreted to mean that white is favored over black. Wait until you find out what this really means in the next issue.

Speaking of Israelites, the pro-white individual hates Jewish people, which reveals their ignorance further. The Jewish people are God’s chosen people and the Bible is the story of how He embraces both Jew and Gentile so all people might be saved. Salvation is through the Jewish Jesus. This group thinks they have God, but their god is hate, which is satanic.

Thus saith the Lord the King of Israel, and His redeemer the Lord of hosts; “I am the first, and I am the last; and beside Me there is no God.” ~Isaiah 44:6 KJV

Moreover, most Christians know, at least, one of God’s commandments, which is to “Love your neighbor as yourself.” Nevertheless, the KKK is notorious for hate.

Yes, Moses was Jewish and he married an Ethiopian. That’s right, you know she was black. Miriam and Aaron spoke against Moses for marrying a black woman. Thus, Miriam was struck with leprosy. Aaron was a high priest so I’m guessing that was why he wasn’t stricken.

[9] And the anger of the Lord was kindled against them; and He departed. [10] And the cloud departed from off the tabernacle; and, behold, Miriam became leprous, white as snow: and Aaron looked upon Miriam, and, behold, she was leprous. ~Numbers 12:9-10 KJV

I think God made Himself clear here.

Your mission is to clarify God’s command to love one another, if you can and point out these distinctions. The KKK has been practicing hatred and ignorance for so long, it’s hard to expect them to be reasonable.