A religion of people claiming Christianity

They claim to be the true witnesses for God whom they call Jehovah.

They try to make disciples. 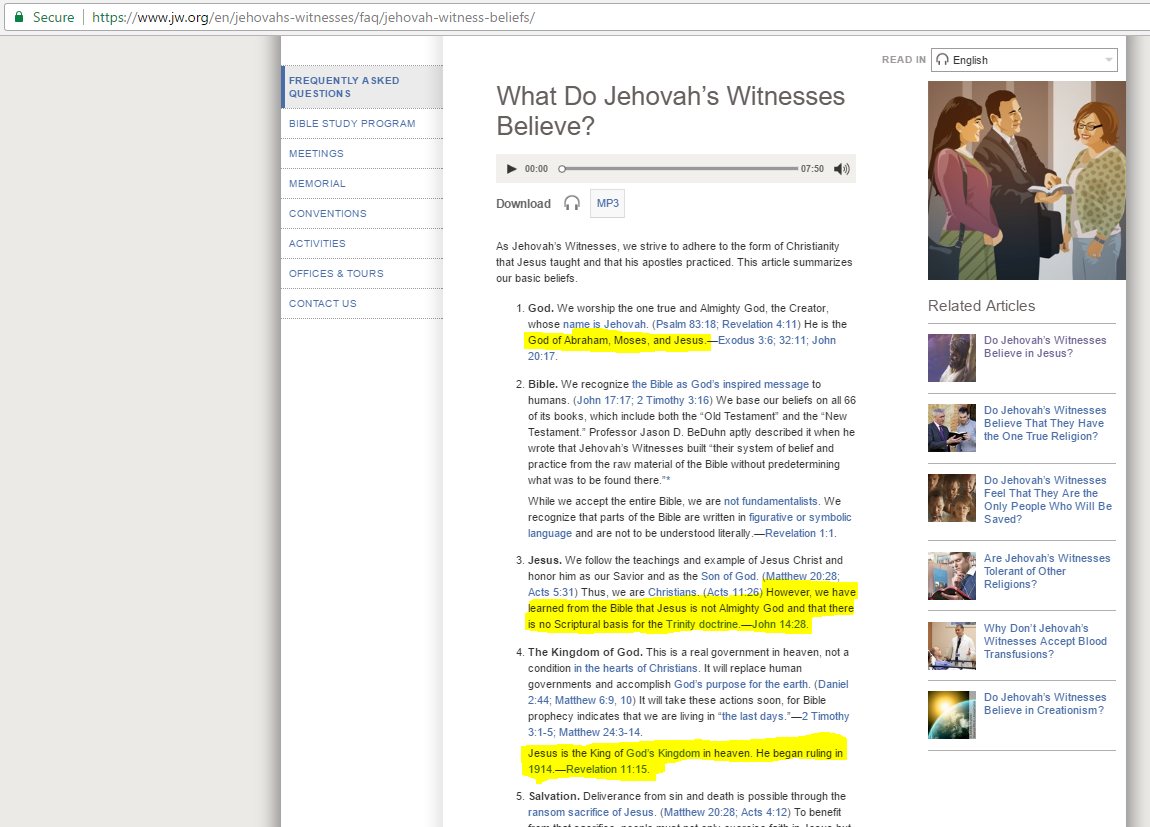 Jehovah’s Witnesses knock on people’s doors with the intent to give them pamphlets containing information about Jesus Christ and how to become a “witness.” Many Jehovah’s Witnesses exist— and they do work to share what they believe is the gospel— unfortunately, they are not authentic disciples of Christ. They do not understand being born again.

They think Jesus began ruling in 1914.

They reject the trinity doctrine that Jesus is God. They also reject that God is one God in three persons.

They reject that souls are eternal and that souls will burn forever in the lake of fire. 3 [10] And the devil that deceived them was cast into the lake of fire and brimstone, where the beast and the false prophet are, and shall be tormented day and night for ever and ever. [11] And I saw a great white throne, and him that sat on it, from whose face the earth and the heaven fled away; and there was found no place for them. [12] And I saw the dead, small and great, stand before God; and the books were opened: and another book was opened, which is the book of life: and the dead were judged out of those things which were written in the books, according to their works. [13] And the sea gave up the dead which were in it; and death and hell delivered up the dead which were in them: and they were judged every man according to their works. [14] And death and hell were cast into the lake of fire. This is the second death. ~Revelation 20:10-14 KJV

They do not take the Bible literally.

They are taught that they are the only ones who will be saved when “Armageddon” comes as the end of the world. After the Armageddon, 144,000 of them will reign in Heaven with Jehovah while the rest will build up and live in perfection on the earth.

They do believe in disfellowshipping, which is also known as shunning or excommunication.

They also believe that women should not teach or be in leadership roles but it is in every role, not just the church role.

The Jehovah’s Witnesses have around 8 million members and they have several layers of leadership in their hierarchy.

If someone you know is interested in the JW doctrine, show them the scriptures:

Tell them that they must be born again of the Holy Spirit of God because the Bible says that He is our Helper who helps us.

Show them the scriptures about Jesus being God. Find them here.   Help them to see that cutting out the name Jesus, cuts out the Savior.

Christopher Columbus “discovered” America in 1492, but they believe Jesus began His rule in 1914. Think about that.

It is interesting that they would say “Abraham, Moses, and Jesus” instead of “Abraham, Isaac, and Jacob,” which if you know the Bible, it is an important distinguishing factor that supports the Jewish people and rejects the Islamic belief.

If you read the King James of Revelation 20:10-14, it is easy to see that souls will burn in fire forever. Share those scriptures.

We all understand that certain parts of the book of Revelation and other prophecies are figurative, but at the same time, they are describing a literal future that God desires for us to search out. Everything else in the Bible is the literal, true, and accurate account of the history of the world and how God created everything. If they don’t believe the Word, then they don’t believe Jesus.

If you’ve ever listened to Jehovah Witnesses talk about Armageddon or their beliefs, they never really talk using the scriptures. Instead, they talk about the publication, the WatchTower. They also never talk about the work of the Holy Spirit. It seems to me that Jehovah’s Witnesses are trying to work out their salvation without Christ because they are not born-again, but are trying to do works without the indwelling work of the Holy Spirit. They are taught never to celebrate holidays or birthdays, but the Jewish people are well-known for celebrating holidays that are meant to commemorate something that God has done or to teach their children about Him. Read more about celebrating holidays here.

We again understand that sometimes you have to leave family members because of their sinful lifestyles, however, Jehovah’s Witnesses excommunication views are flawed because they will excommunicate over smoking, but not over spousal abuse or child molestation.