The following content is part of the Spring/Summer 2016 Issue. Articles that are in this issue contain information about the biblical truth about self-righteousness, learn how false preachers are twisting grace, find out if it is right for women to speak, teach, or preach in the church, learn what it means to be saved in childbearing, and much more.

Prideful Christians are Thieves and Robbers

Pride manifests itself in two major ways:  The first manifestation is by withholding affections by not extending a courtesy to someone because of the assumption of that person having the pleasure of gloating.  Prideful people start withholding affections when they assume their affection might exalt the person to whom they should give support.  They would rather keep them pressed down instead of lifted up.

This shall they have for their pride, because they have reproached and magnified themselves against the people of the Lord of hosts. ~Zephaniah 2:10 KJV

These thoughts are in the mind of a prideful Christian.  They are constantly trying to protect themselves even if their perceptions are wrong or misguided.  Sadly, they rob people of agape love.1God’s agape love is not merely expressed in words, but in deeds and in truth.  They ought to be happy to suffer wrong—if it occurred, but they are too puffed up over what they perceive as winning.  If they were humble, they would gladly accept loss— if it occurred, but they are blind and therefore, they throw up walls and traps.   They will shut out advice in order to be exalted.

[15] His scales are his pride, shut up together as with a close seal. [16] One is so near to another, that no air can come between them. [17] They are joined one to another, they stick together, that they cannot be sundered. ~Job 41:15-17 KJV [This references Leviathan, the sea dragon who represents pride and its stubborness.]

The second manifestation is the desire for exaltation, which displays itself in a boastful way when a prideful person feels accomplished over their abundance, worldly comforts, or status. They like fame and desire attention hoping that others will behold their “greatness.” They like to surround themselves with the upperclass; the status-holders.

I wrote unto the church: but Diotrephes, who loveth to have the preeminence among them, receiveth us not. ~3 John 1:9 KJV

They are also religiously proud of their brands, accomplishments, and labels.

You see, from the beginning the devil wanted to be worshipped.~Know Your Enemy

Prideful Christians do not realize that their pride cuts them off from God.  They seek to have and steal the glory from others by exalting their own selves.  Their pride consumes them so that they cannot express true humility and supportive affection, which is God’s way.  Their asocial connections, with the ones they look down upon, deceives their own heart that affections exist. Therefore, when standing before the Lord, Jesus will separate them, as goats, to the left.2Matthew 25:31-46 KJV

[4] The wicked, through the pride of his countenance, will not seek after God : God is not in all his thoughts. [5] His ways are always grievous; Thy judgments are far above out of his sight: as for all his enemies, he puffeth at them. [6] He hath said in his heart, ‘I shall not be moved: for I shall never be in adversity.’ [7] His mouth is full of cursing and deceit and fraud: under his tongue is mischief and vanity. [8] He sitteth in the lurking places of the villages: in the secret places doth he murder the innocent: his eyes are privily set against the poor. [9] He lieth in wait secretly as a lion in his den: he lieth in wait to catch the poor: he doth catch the poor, when he draweth him into his net. [10] He croucheth, and humbleth himself, that the poor may fall by his strong ones. ~Psalm 10:4-10 KJV

Look at that last statement.

He croucheth, and humbleth himself, that the poor may fall by his strong ones.

The prideful person will humble themselves to set up the truly humble person for a fall.  They may do this through scamming them or through trying to obtain a winning position.  They are always focused on trying to prove that they are better, smarter, or more affluent than someone else because they compare themselves up against others to win.  They can be opportunists who take advantage of others to get ahead or they prevent lifting others up.

Notice also, in the psalm, the phrase “He lieth in wait to catch the poor.”  It is a great example of “the poor in spirit” alongside the “monetarily poor.”  The poor in spirit are humble people who are willing to suffer wrong as they continue in servanthood out of love.  The prideful Christian will not serve them because of their aloof hatred.  They withhold affections and through false assumptions exalt themselves against the humble.  They will only serve others if it benefits themselves.

Withholding affections and the desire for exaltation keeps a prideful Christian in their sin as they continually rob people of love.  It blinds them. Only through established humility by becoming a servant without pretense or profit, will they escape their sin.

Blessed are the poor in spirit: for theirs is the kingdom of heaven. ~Matthew 5:3 KJV 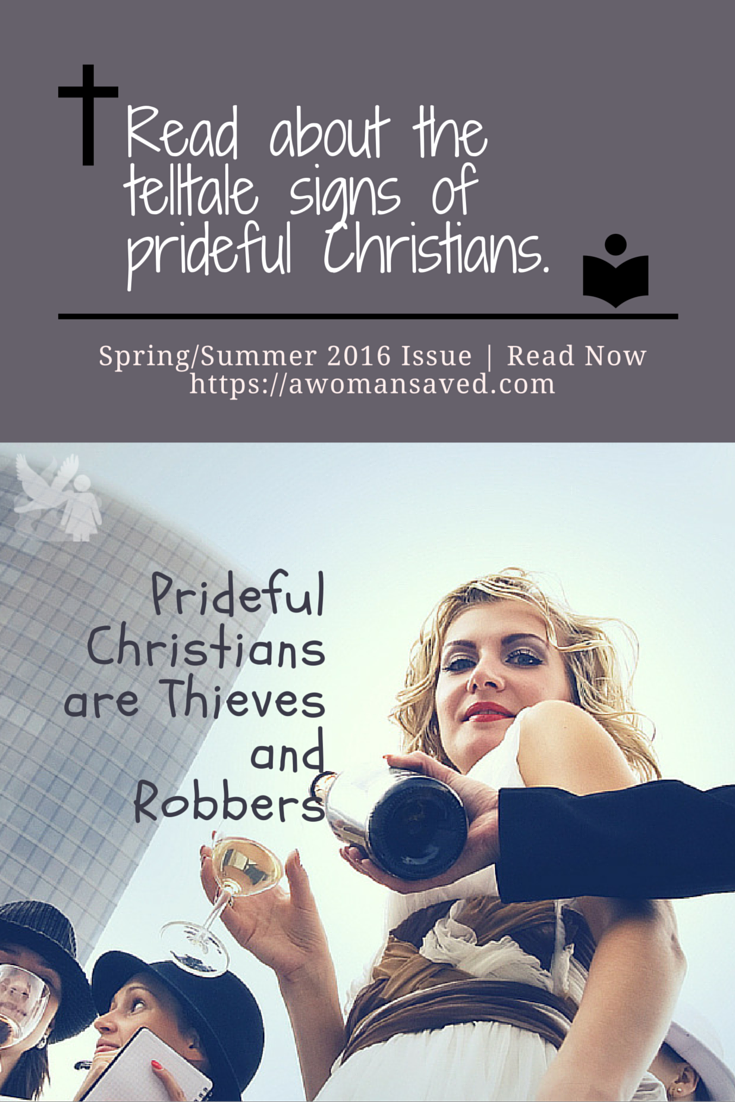