The following posts are part of the Spring/Summer 2015 issue. This was originally a free issue, which was downloaded by many who gleaned. Articles that are in this issue contain information about Christian headcovering, false doctrines most people are believing, what it means for a heart to wax gross, and more.

Learning to be Raped 1000 Times

I am happily married. However, it wasn’t always like this many years ago.  I was an adulteress.  How I got to that point was through a series of “unfortunate events.”  I promise you, it was never my life’s goal.  One of the ways that started me down the promiscuous road was that Satan used males to abuse me through molestation.  Through being molested in my childhood, I came to fear disappointing my offender.  When I was no longer a child, I could no longer call my encounters with men, molestation.  It was now consensual.  I was there and I consented.  Yet, with my whole heart, I can tell you that there were many times I didn’t want to consent.  Fear itself overtook me.  It is paralyzing to be so afraid that you might not please someone.  Sometimes it almost doesn’t feel like fear, but rather an emotional trap that causes women who were molested as children to continue in the same pattern repeatedly when alone with another man. At least, this is what I’ve come to know of myself. I’ve discovered that it’s the devil’s “hidden rape” of molested women. What’s worse is that the woman scarcely realizes her brain-washed, indoctrination victimization.

Whenever I’ve had dreams that I start to run off to cheat, I really don’t realize that I am married.  Then suddenly it hits me and fear grips me.  It is a fear that tells me to run from sin, but then I begin to fear disappointing the person I’ve run off with—not because I want them.  I absolutely don’t!  It’s that molesting pattern. Then I hear someone say, “Your husband’s coming” and I really start to panic.  Then I wake up.  You have no idea how thankful I am that the dream isn’t real.  I look upon my husband and I thank God.  He is a gentle man.  He has always been a kind man toward me in our intimate relations, yet he is just as virile as most men.  If he had been a man who was forceful or manipulative with his feelings on the nights when I am not up to “it,” then it would change everything.  I would feel like I was married to a man who felt it was his right to take what he wanted just like the molester did.

Molestation taught me how to be “raped quietly.”  Even when I consented as an adult, no one but me and God knew that most of the time, I either hated being there or I hated myself. I know certain men look upon the promiscuous girl as a whore, but I think she was probably taught “how to be raped quietly a thousand times.” 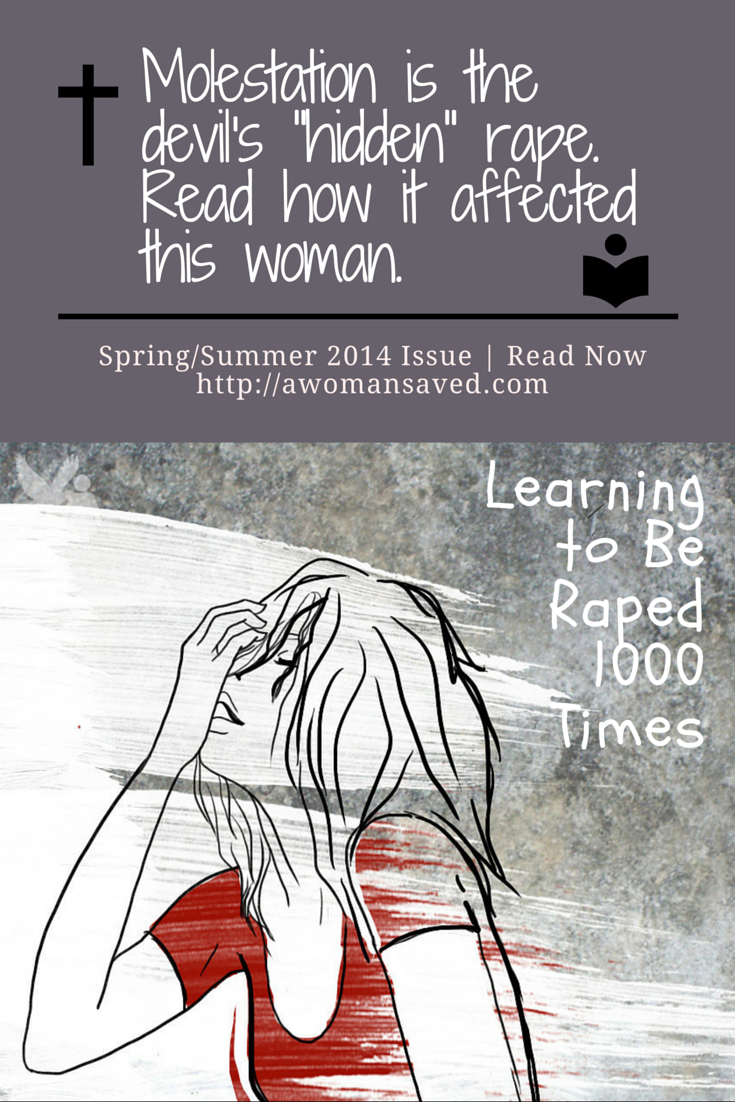 This story brings to light much of the reason why many women and girls do not tell anyone about these crimes committed against them. They often blame themselves, especially if it could have been avoided, because of the circumstances surrounding how they were duped or what consensual role took place.

Having been a victim of sexual abuse, I know that we must teach our children to understand how to be strong under peer pressure, avoid circumstances of molestation or even sexual curiosity, and especially adhere to God’s Word.  Furthermore, we must teach them how to stop someone firmly in their tracks who tells them they are lying if they are not.  They must know how to stand on the truth with conviction through fear. It will go a long way even in their faith.

1 in 4 girls are sexually abused before the age of 18.  I personally feel that this number is much higher because it is one of those closet sins that many people never treat.  Clearly, this is a notable problem that needs to be discussed openly among us.

Although, innocent until proven guilty, we can see that problem manifested itself among women like Bill Cosby’s accusers, some of whom were living a promiscuous lifestyle, who buried their convictions because they did not have the strength to stand in a world where people were naturally against them due to the acting persona of their duplicitous attacker and because they were a lesser power. This type of mentality continues today.